This was my first visit to The Victory Show, which takes place just outside Cosby in Leicestershire.  Now in its eighth year, the show took place on an extensive 100 acre site and promised a wide variety of WWII tanks and armoured vehicles, a large number of re-enactment groups and an impressive flying display of planes from the period.

The mix of static displays, living history encampments (including authentic looking trenches and other scenarios), together with set-piece battle re-enactments and a historic airshow meant that there was plenty to see and enjoy and lots of photographic opportunities.

I actually missed the set-piece battle on the main field in the afternoon as I was at the opposite end of the site and somewhat distracted while talking to a lovely lady from one of the large re-enactment groups.  However, I did manage to catch a little of the morning skirmish and most of the flying displays.

I enjoyed looking round the static displays very much and everyone I talked to was really friendly which for someone like me is a real bonus as I sometimes have trouble approaching people to engage with them.

The highlight of the flying display for me was the North American B-25 Mitchell bomber.  The sight and, just as important, the sound of this rare vintage plane flying low over the airstrip and then performing various manoeuvres to show off its capabilities was a real treat for everyone who was there.

If the B-25 was the highlight, the supporting cast wasn’t far behind.  We were treated to a magnificent display of WWII fighter planes including the Carolyn Grace Spitfire…

and the Yakovlev Yak 11…

I have included a few of my favourites from the day in this post, I hope you enjoyed them.

Those people who know me well would tell you that I am not a big fan of aeroplanes.  In fact, the opposite is true.  I have never been in an aeroplane myself and I have no plans to ever change that.  Not only that, I don’t even like driving near airports in case a plane should suddenly fly low over the road and frighten the life out of me. 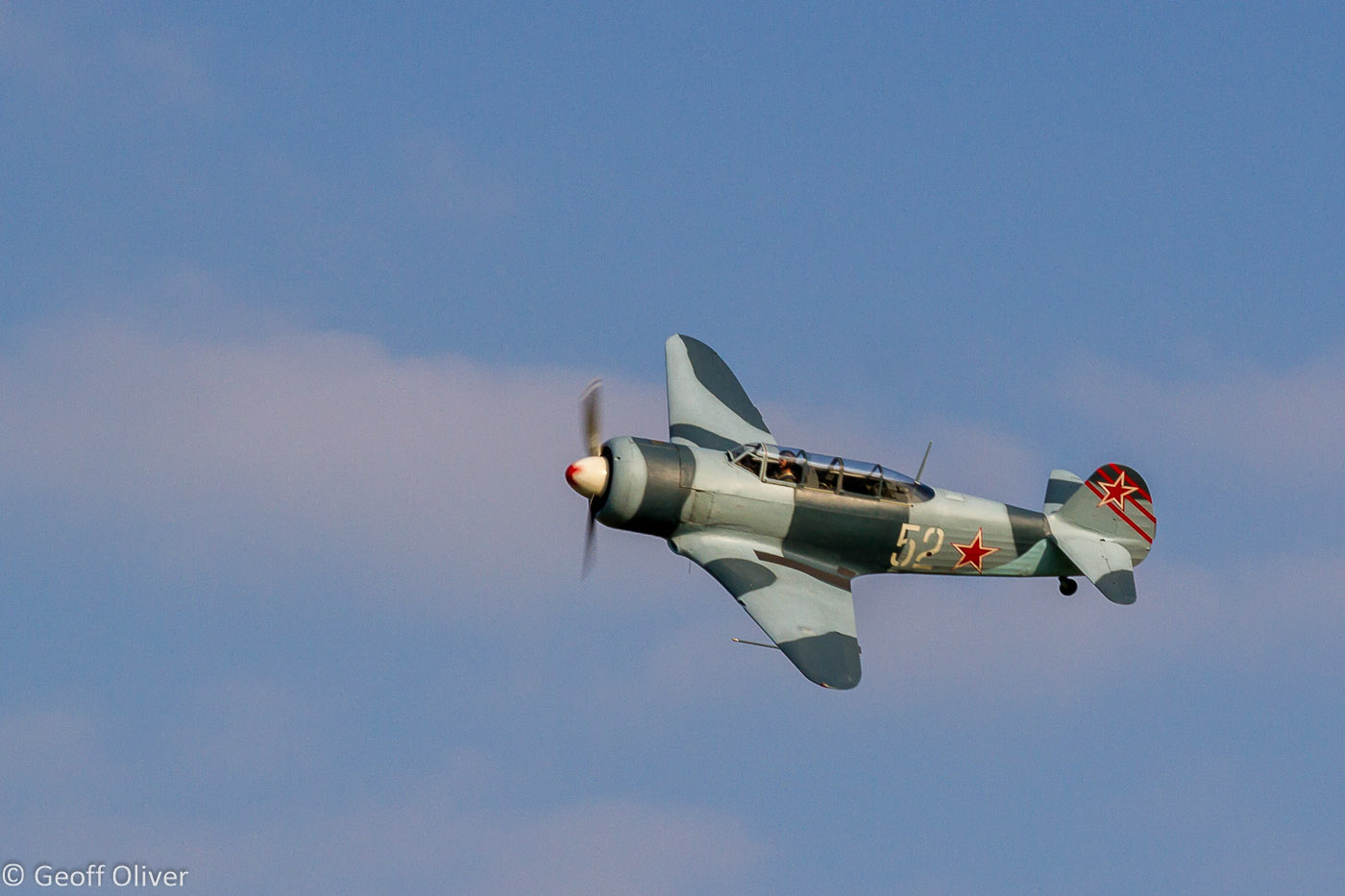 How is it then, that I recently decided to book a ticket to see my very first airshow?  Well, one reason is that this particular air display promised to feature some of the oldest planes still flying in the world.  The main reason, however, was because this event was to take place on a summer’s evening in July, and it was the prospect of photographing beautiful historic planes combined with the (hopefully) warm evening light that got my attention.

So it was that I set out on the relatively short journey from my house to the Shuttleworth Collection at Old Warden, near Biggleswade.  This was another first for me as I had not been there before, although I did once go to the neighbouring Birds of Prey Centre with my good friend Barry.

Although it was my first air display, I have photographed propeller driven aircraft in the past at various historic re-enactments, usually associated with WWII.  Consequently, I was aware of the decision that all photographers taking this sort of subject have to take, namely how fast to set the shutter speed.

On the one hand, a fast-moving plane demands a fast shutter speed in order to obtain a sharp image, especially when using a longer lens.  On the other hand, a fast shutter will “freeze” the propeller and make the plane resemble a model aircraft, hanging by a thread from the bedroom ceiling.  A slower speed is therefore needed in order to show the rotation of the propeller and give the picture a feeling of movement.

On the night, I tried a number of different shutter speeds including 1/200 second which gave good rotation of the prop but reduced my “keeper” rate somewhat due to camera shake (I was using an 80-200mm lens, mostly at the long end).  I also tried 1/320 second which showed less propeller movement but gave me many more keepers in terms of sharpness.  I also tried 1/250 second which was probably the best compromise, at least with this lens.  I dare say that a lens with built-in image stabilizer (IS) would have given me more sharp images at the slower speeds but I don’t have one of those as yet.

So how did it go?  Well, despite being a long way out of my comfort zone regarding my fear of planes, it was a brilliant event that I thoroughly enjoyed.  The perfect weather conditions certainly helped, it was a clear blue sky for most of the day and very warm indeed, even for July.  Add to that the beautiful planes, the great location and a well organised programme run by people who clearly have a love of all things flying and know how to run an event.

I must mention the arrival of the Hawker Sea Fury and Hawker Sea Hurricane.  They arrived side-by-side from the right-hand side of the airfield and flew across the viewing area literally wing tip to wing tip.  Luckily for me, my face was buried in the back of my camera with my finger welded to the shutter button as they flew by.  If I hadn’t been taking photos I’m sure I would have run for cover as they were frighteningly close, as you can see from the sequence of photos below.  I guess credit must go to the pilots for the outstanding skill they have in being able to fly so closely without colliding.

The light got better as the evening progressed, with the best light being saved for the WWI and Edwardian planes at the end.  If this Bristol Boxkite below looks familiar, you may have seen it staring in the hit movie “Those Magnificent Men In Their Flying Machines”.

Until next time, whatever your chosen subject, enjoy your photography!